The digital currency bitcoin vaulted to a new record high above $4000 on Saturday, boosted by strong Japanese demand on its way to multiplying its value fourfold this year.

Bitcoin hit an all-time high of$4,225.40 early Sunday before slightly paring those gains to trade near $4,000, according to CoinDesk.

The digital currency has now quadrupled in 2017, and is up about 40 percent in August alone. Bitcoin’s market value is now around $64 billion, up about $10 billion in the last week.

The surge picked up speed in the last week, mirroring gold’s climb amid a global selloff in stocks and bonds. Rising worries about North Korea’s nuclear threat have sent investors flocking to perceived safe-havens and alternative assets.

“Bitcoin is benefitting from geopolitical tensions – trading in Japan and Korea has increased significantly over the last few months,” Brian Kelly, a CNBC contributor and head of BKCM, which runs an digital asset strategy, said in an email. He also attributed price gains to investors buying back bitcoin after the Aug. 1 split and greater attention from the Russian government.

This week, Fidelity launched a feature allowing customers to also view their Coinbase bitcoin holdings. The currency also got a boost from Goldman Sachs, which in a report released this week said it is harder for institutional investors to ignore cryptocurrencies like bitcoin.

That said, bitcoin’s future is still uncertain. The digital currency could potentially split again in November, when the second phase of an upgrade proposal called Segregated Witness is implemented.

Chris Burniske, author of the upcoming book, “Cryptoassets: The Innovative Investor’s Guide to Bitcoin and Beyond,” also noted a sharp pullback in price would not be surprising, given bitcoin’s rapid surge.

He noted on Twitter that upticks in the bitcoin price and Google searches have historically led to price corrections. 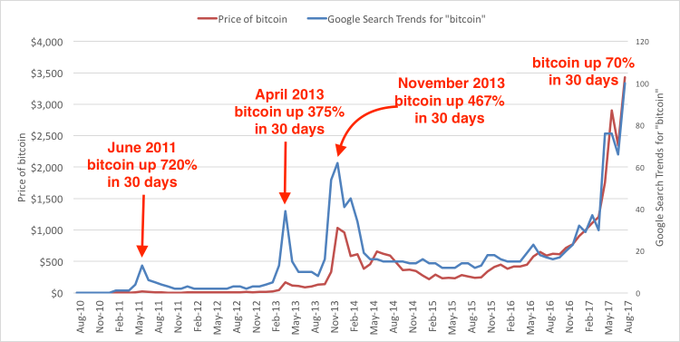 WATCH: Here’s what sets Ethereum apart from its rival Bitcoin